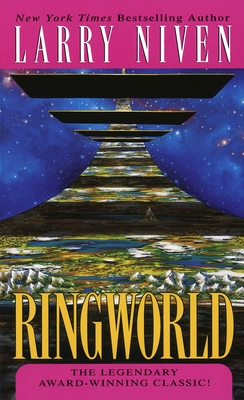 Winner of the Hugo and Nebula Awards for best novel

Four travelers come to the ringworld. . .

Louis Wu: human and old; bored with having lived too fully for far too many years. Seeking a challenge, and all too capable of handling it.

Nessus: a trembling coward, a puppeteer with a built-in survival pattern of nonviolence. Except that this particular puppeteer is insane.

Teela Brown: human; a wide-eyed youngster with no allegiances, no experience, no abilities. And all the luck in the world.

Speaker-To-Animals: kzin; large, orange-furred, and carnivorous. And one of the most savage life-forms known in the galaxy.

Why did these disparate individuals come together? How could they possibly function together?

And where, in the name of anything sane, were they headed?

Larry Niven was born in 1938 in Los Angeles, California. In 1956, he entered the California Institute of Technology, only to flunk out a year and a half later after discovering a bookstore jammed with used science-fiction magazines. He graduated with a B.A. in mathematics (minor in psychology) from Washburn University, Kansas, in 1962, and completed one year of graduate work before he dropped out to write. His first published story, “The Coldest Place,” appeared in the December 1964 issue of Worlds of If. He won the Hugo Award for Best Short Story in 1966 for “Neutron Star” and in 1974 for “The Hole Man.” The 1975 Hugo Award for Best Novelette was given to The Borderland of Sol. His novel Ringworld won the 1970 Hugo Award for Best Novel, the 1970 Nebula Award for Best Novel, and the 1972 Ditmar, an Australian award for Best International Science Fiction.